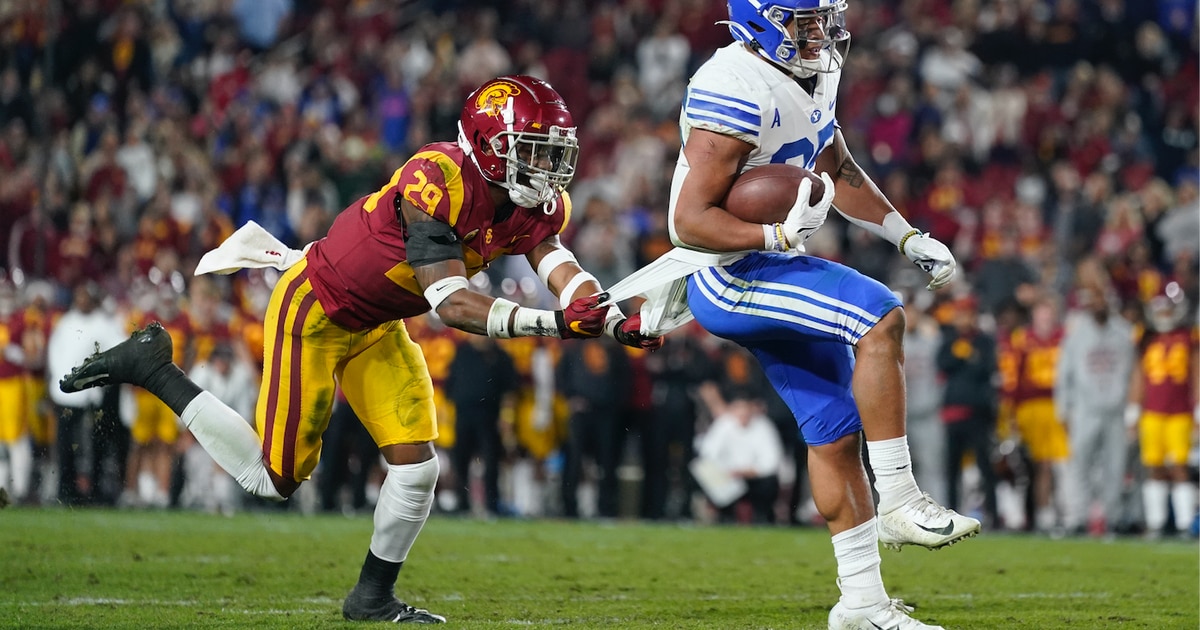 The song was from the student section of USC, according to the university.

(Ashley Landis | The Associated Press) Brigham Young running back Tyler Allgeier (25) runs to the end zone for a touchdown past Southern California safety Xavion Alford (29) during the first half of an NCAA college football game in Los Angeles, Saturday, Nov. 27, 2021.

The University of Southern California’s athletic department on Sunday issued a public apology for what it called an “offensive chant” from its student section in BYU’s 35-31 victory over the Trojans on Saturday night.

“The offensive chant from our student section directed at BYU during the soccer game last night does not align with our Trojan values,” the department said in a statement on Twitter. “It was rude and we apologize to the BYU program.”

The offensive chant from our student section directed to BYU during last night’s soccer game does not match our Trojan values.

It was rude and we apologize to the BYU program.

The song in question appeared to be “F — the Mormons,” which was tweeted by several users on Twitter during the game or later in response to the USC statement and a question from the Salt Lake Tribune.

“I didn’t hear the song but I know it doesn’t reflect the Trojan family that I have come to know and love,” So’oto tweeted. “Sincere apologies from a former @BYU @BYUfootball @kalanifsitake @TomHolmoe. All love. Tough and contested play.

So’oto played four years at BYU, first as a tight end and then in defense. Quarterback Jaxson Dart and linebacker Tayler Katoa are both originally from Utah and members of The Church of Jesus Christ of Latter-day Saints, owner of BYU.