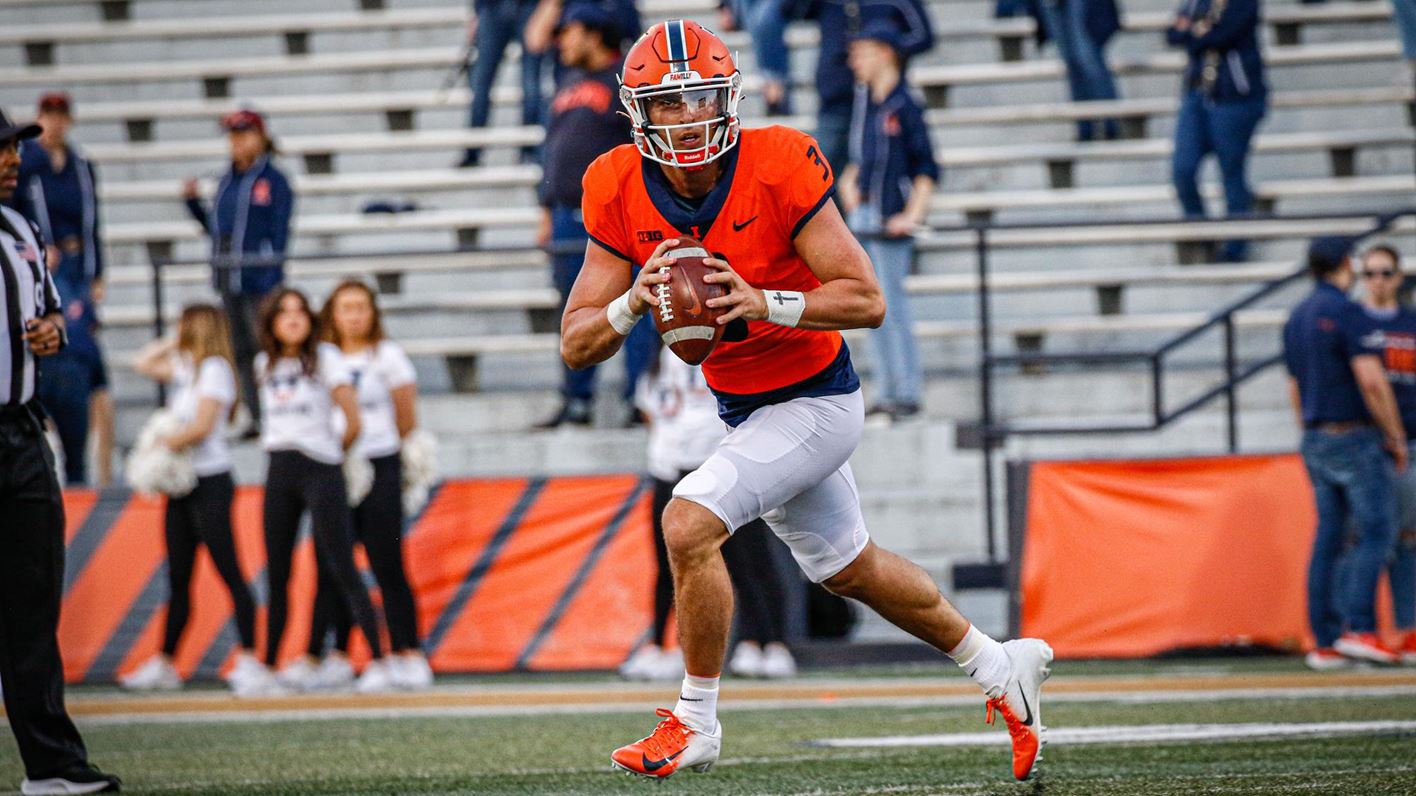 CHAMPAGNE — The Illini were back under the lights of Memorial Stadium on Thursday for the annual Orange and Blue Spring game. The white team, consisting of Illini’s first team attack and defense, outplayed the blue team, winning 58-40.

Thursday’s game marks Bret Bielema’s second spring game as head coach of Illini as he prepares for the No. 2 season at Champaign. The Illini played four quarters in a mostly traditional format, with the first and third quarters ending in a field goal shootout. The score was normal for the White team, while every point for the Blue team counted double.


“Anytime you get into one of those situations you just want your guys to play hard, play healthy and come out better at the back than when you came out, and I thought that happened tonight. Lots of really positive steps in the right direction, lots of mistakes that can be corrected,” head coach Bret Bielema said. “I’m excited because I think this is a team that really wants to be. driven, a group that really listens not only to their coaches but also to their other teammates. I thought there was a lot of good communication between our older players and our younger players. with some of the players seeing balls fly for the first time. Some of the newcomers have come in and done some good things.

LUNNEY’S OFFENSE SHINES
New offensive coordinator Barry Lunney Jr. coached the Illini for the first time on Thursday, debuting his new offense which he describes as a combination of tempo and pro style. Transfer from Syracuse QB Tommy DeVito was the leader for the white team to start the game.

In the first half, DeVito showed strong relationships with wide receivers Isaiah Williams, Miles Scott and Pat Bryant as well as tight end Tip Reiman. DeVito threw his first touchdown pass to Williams with a 25-yard connection. The pair scored again later in the second quarter on a 44 yard run.

“Offensively, I like the way Tommy DeVito handled the huddle and we always knew he had a good arm live, from the first time we saw him in theaters to where we saw him today, and the first big action the crowd got I saw him, but he’s definitely a guy who can throw the ball He’s athletic, he’s dynamic, he’s had a lot positive today,” said Bielema.

Running backs Chase Brown and Josh McCray both played with 1s on Thursday, combining for 151 yards. McCray scored the first touchdown of the game with a short run in the first quarter. He reached the end zone again just after half-time to extend the White team’s lead. Brown also had a rushing touchdown in the first half.

THE YOUNG DEFENSE IS GROWING
Defensive coordinator Ryan Walters presented his Year 2 defense which will feature several young or new players. In the first half, the White defense allowed just 158 ​​total yards, with the White offense nearly doubling that number.

The starting defense conceded only one touchdown in the first half and blanked the blue team in the first quarter. They also limited the Blues’ attack to two consecutive three-and-outs to open the game.

The highlight of the first half was defensive back Kendall Smith’s interception – the only takeaway from the game. Linebackers Seth Coleman and Isaac Darkangelo led the White defense in total tackles while Devon Witherspoon and Tahveon Wilson each interrupted passes.

On the blue defense, defensive back Prince Green impressed with eight total tackles, including four solo saves. Defensive back Kionte Curry and linebacker Ryan Meed each had five tackles and Curry had three solo tackles.