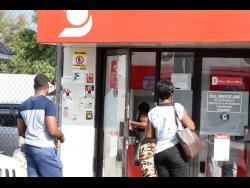 At a time when the nation is reeling from the oppressive fallout of the COVID pandemic, banks’ imposition of higher bank fees and charges has drawn a visceral reaction from many. Even Prime Minister (PM) Holness and Finance Minister Nigel Clarke joined in the public outrage and denounced the increased fees. They join PM Mia Mottley and other leaders around the world who are pushing the financial industry to reduce or eliminate predatory fees and charges.

Although Minister Clarke expects the banks to react after his dialogue with them, the banks have so far held firm, with one bank delaying the fee hike by six months. Calling on banks to pay attention to the social context, the Prime Minister urged them to be “fair and conscientious” and underlined their “superior duty to protect the vulnerable”. So if the banks fail to act, surely the Prime Minister can be expected to take legislative action (or an alternative) to protect the vulnerable. Law? Well, the government’s legislative record in this area leaves us in doubt!

In November 2013, MP Fitz Jackson raised concerns about bank charges through a private member’s motion. At that time, banking interests worked closely with the executive to oversee the implementation of IMF economic reform measures in Jamaica through the Economic Program Oversight Committee (EPOC). Banking interests, which maintained almost unlimited access to political power, dominated the 11-member EPOC, which included five people from the financial sector, three from the public sector and three from civil society.

Despite MP Jackson’s efforts to limit bank charges, former Finance Minister Peter Phillips surprisingly announced new taxes on the use of ATMs, electronic banking, point-of-sale ATMs, checks and Internet transfers in April 2014, a decision that inevitably increases bank charges. Opposition finance critic Audley Shaw accused the government of colluding with the banks and raising the cost of doing business. In a rare victory for strong public advocacy, the proposed taxes were scrapped.

In June 2014, under EPOC oversight, Parliament passed the Banking Services Act in line with commitments made under the four-year program of the IMF’s Extended Financing Facility. However, MP Jackson was unable to influence the PNP-dominated parliament to include adequate measures in the legislation to protect depositors. In fact, Opposition Finance Critic Audley Shaw noted that the legislation did not go far enough in dealing with bank charges and demanded the relevant regulations.

Undeterred, in 2017, under the new JLP administration, opposition MP Jackson introduced a bill to amend the Banking Services Act 2014 to regulate fees and charges, provide more information and a set of mandatory services to customers. Using its legislative majority, the JLP administration rejected the bill by a vote of 30 to 29 on February 13, 2018. Audley Shaw, then finance minister, argued that most of the provisions of the bill were in the law Banking Services (Deposit Taking Institutions) (Customer Related Matters) Code of Conduct, 2016. However, according to the Bank of Jamaica: “The Code is not intended ensure consumer protection for users of financial products and services. nor is it intended to regulate fees and charges…”. Minister Shaw further promised that aspects of the Bill not addressed in the Banking Services Act would be included in a consumer protection framework to be implemented in 2018. To date, no framework of this type does not exist.

We clearly have a problem! It looks like a “legislative football match”. Neither the PNP nor the JLP administrations have created an adequate policy/legislative framework to protect the public or the most vulnerable. A central problem is that the main players in the game have been the executive. The public has no influence on policy or legislation. Non-executive legislators, like Congressman Jackson at the time, have no effective influence and have been unable to represent the voice of their constituents on this issue to ensure fairness and protection for the most vulnerable.

EQUITY AND PROTECTION OF VULNERABLE PEOPLE

Speaking at the JSE Conference on January 25, Prime Minister Holness said: “My job as Head of Government is to facilitate market-based approaches and solutions so much, but I have a higher duty to protect the vulnerable people of the country… I am not appealing to your conscience here. It makes good business sense to protect the people of the country. So, will the Prime Minister enforce the protection of the vulnerable using legislation or will he rely on the bank’s ‘good business sense’?

For banks, “good business sense” means higher bank fees and charges. This has been made clear by the Jamaica Bankers Association (JBA), insisting that although negatively affected by the pandemic, banks have acted as a “shock absorber for the economy”, engaging in operations costly to continue services. Banking services are indeed expensive. In addition to the obvious infrastructure and personnel, the pandemic has accelerated the demand for digital financial services (DFS), fintech technology and related security. To compete globally and meet the global financial needs of businesses, as well as the general public, banks and other financial institutions must remain financially viable. It is therefore in the public interest that banks (or alternative financial institutions) survive and continue to provide the necessary financial services.

The central challenge is how to create policy to support financial institutions while protecting the most vulnerable in our society, including micro and small businesses, who need banking services but are unable to bear the burden of higher fees. . In doing so, we must balance the social and economic benefits of market-driven decisions to ensure the viability and growth of the banking/financial sector, against the risks of further alienating the unbanked and creating financial instability if Market-driven decisions, such as higher commissions/bank fees, are in fact predatory and exploitative, or perceived to be so. How should we forge consensus among these competing interests and shape policy in the best interests of our country?

Credible resolution must involve careful analysis of the relevant data. While officials provide technical advice on the macroeconomic impacts and other implications of higher fees/fees, policymakers tend to lack public data that can provide valuable detail on the impact of higher bank fees on their lives and livelihoods and how best to address this issue. .

What is missing are appropriate channels for the public to influence policy. The Parliamentary Committee on Economics and Production may be used to receive submissions from citizens and arrange meetings with citizens, community groups and industry organizations as provided for in Standing Order 73C. In doing so, the committee’s recommendations to the House of Representatives will be informed by public views as well as the committee’s own research and technical advice on the matter. What is also needed is a reformed Parliament that allows a non-executive majority to vote and overrule the executive on policy and law, if deemed to be in the best interest of the public. Without such reforms, the executive will continue to dominate the legislative process and make suboptimal decisions for the benefit of the few.

The “duty to ensure fairness and to protect the vulnerable” and, above all, to make optimal decisions in the best interests of all Jamaicans, is a shared responsibility of all parliamentarians, as well as the public, and requires a different approach to decision making. politics and law.

Rosalea Hamilton, PhD is the founding director of the Institute of Law & Economics. Send your comments to: rosaleahamilton@gmail.com

If you want an American football game for the Superbowl on Sunday, you have to play the Retro Bowl – now available on Switch